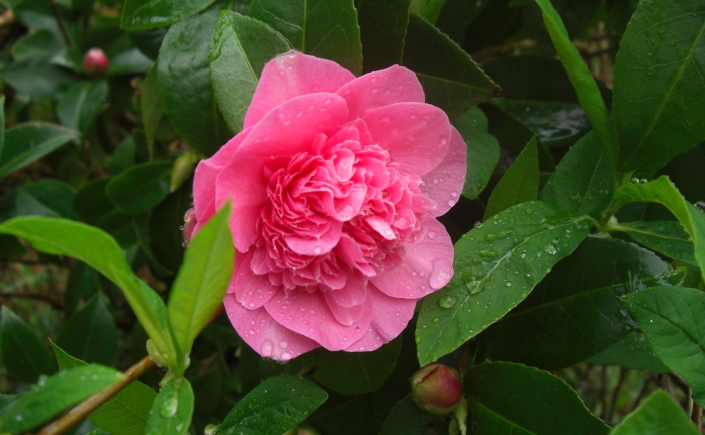 The weather is beginning to warm up as the days get longer, a lot is going on in the garden, the Camellias are blooming and  brighten up a shady spot. They love acid soil with plenty of humus, take cuttings after flowering from new semi-ripe growth and place in a designated acid soil bed in dappled shade they will take many months to root. 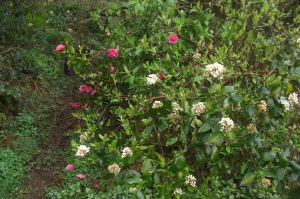 This japonica planted next to the Viburnum which is also flowering now, and fills the air with it’s heavy sweet scent. This variety likes acid woodland soil with good drainage, is evergreen, and thrives in deep shade.

This native of China clambers up over 20 feet and produces a canopy of snow white flowers with a subtle vanilla scent, it’s long glossy leaves also have interest. It loves it’s base in deep shade under this Rhodedendron.

Another Acid loving plant in bud now is the Blueberry . It responds to a good mulch of well rotted manure in autumn .

This well known superfood, has numerous health benefits, very rich in vitamin C and K, important in skin and gum regeneration and blood clotting. High in antioxidants, known in cancer prevention and oxidative stress like exercise, helps to lower cholesterol.

In our UK 100 year old garden there is a surprising number of plants in bloom at this time of year, however very few insects to pollinate them, so sometimes you need to help the plants along, like this early  plum.

Use a very soft brush or downy feather, it will improve cropping. I also do it with my peaches in the poly-tunnel, although leaving the doors open this time of year (if temp is not freezing) can help. My favourite flowering tree of all is this magical Umeboshi plum Prunus Ume. 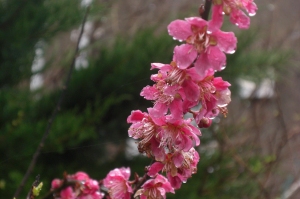 This is actually more related to the apricot, and has a most heavenly scent. The fruit it produces can be preserved and have many health benefits. 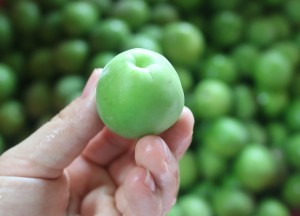 It is pickled, salted or dried,

Their health benefits from recent studies include; Inhibition of H. Pylori bacteria which are implicated in gastritis and ulcers, dental disease and prevention of tooth decay and tests with rats show it has a remarkable effect on endurance exercising of skeletal muscle, so could help athletes!

It can be made into syrup just jar equal weight of sugar to plum and leave for 100 days.  Seeping the plums in vodka or rice liquor, produces a smooth fortified plum wine.  It makes a delicious plum sauce, cooked with sugar, vinegar, spices including ginger, great with poultry dishes.

It’s Mystical and cultural significance in Asia is second to none. Being depicted in ancient art and poetry for centuries. It’s flowering even in snow gives it a surreal and heavenly quality, and its fragrance seems to pervade the whole garden on the coldest of days. It has long represented endurance, perseverance and hope.

In Japan it is often referred to in Haiku poetry and a symbol of protection against evil, planted facing north east, the direction from which it comes.

Nothing is more representative of late winter than the Snowdrop Galanthus nivalis, which has naturalized itself in our garden thankfully avoiding disturbance over the many years.

The plant produces a chemical Galantamine, which is used in Alzheimer’s disease to slow progression.