Humanity has a long history of People using plants to alter their states of mind from the Ayahuasca and Coca of Indigenous South American tribes, or the use of Peyote in Shaman rituals of  native North American Indians famously described by Carlos Castaneda in the teachings of Don Juan 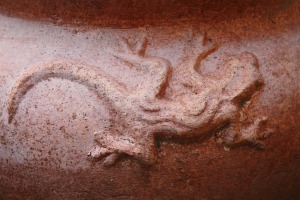 Or the journeys of the Siberian Shaman with Amanita Muscaria, which led to our custom of Santa Clause in his red and white coat, coming down the chimney bearing gifts that they  had crafted whilst under the influence of this powerful and highly dangerous Narcotic Mushroom. Or  chewing the leaves and inhalation of the burning dried root, of Nerium Oleander, by the Oracle at the Temple of Delphi to produce her prophetic trance like state.

The Pythia at the Temple of Delphi.

A highly poisonous globally widespread common garden plant, Oleander is found in gardens and road verges  throughout Greece and the Mediterranean .

You can grow this beautiful plant in containers, to avoid frost, it’s flowers come in a variety of colours, red, pink, yellow or white, and are very fragrant, keep well drained and feed infrequently once a month, let it rest in the winter. Obviously the plant is highly toxic even deadly, but then so are Lilys, keep away from children and pets.

Many have forgotten that common beverages we consume today such as coffee, tea and even beer, were once considered sacred by our ancesters, and such plants as tobacco, were used in shamanic rituals to aid in the passage to the spirit world

These powerful and sometimes deadly psychotropic plants opened up nature’s vista and produced an intimate deep connection with  plants and nature. The plants were even imbued with living spirits, for example the Mandrake root 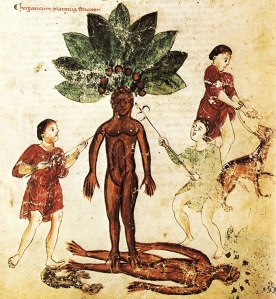 in the shape of a being that takes the person on a journey of discovery or trepidation, or the Ayahuasco vine and Coca plant derived from the fingers of the daughters of the Sun Father which broke off during child birth, were buried in the ground and grew into these 2 plants.

Many customs, rituals, arts and crafts have resulted from the influences of these plants on the mind illustrated are some examples

The wonders or horrors of Nature that were revealed by using these plants revealed our transient existence and the illusion of our habitual fragile reality, as many of these plants effect the ego as well as the mood. We all know how disinhibited and elated we become on drinking alcohol, and then fall into drowsiness or depression.

Now I want to go into a little more detail about some of these plants and like to categorize them into, Stimulating or energizing, Sedating or relaxing and Hallucinogens or waking dream states.

The Tea plant-Camellia Sinensis, member of the Camellia genus, which you can grow outdoors, it will tolerate temperatures down to -5 Celsius in a sheltered well drained sunny spot. It needs acid soil to grow, like all Camellias & Rhodedendrons, it likes a cool moist environment and regular ericaceous liquid fertilizer. First cultivated in China and now  Cultivated as a shrub or small tree throughout the world even here in the UK.                .

Only the choicest top 2-3 leaves and bud are picked steamed and dried to make green tea or left to ferment a while then dried to make black tea. The leaves contain caffeine and xanthines, the latter used in Asthma treatments. But also older and larger leaves contain much more Tannin, which imparts the bitterness, thought to cause cancer of the gut, but now known to have strong antioxidant effects that combat this, as well as antibiotic properties and lowering of blood pressure.

The Coffee Arabica plant, was thought to be derived from Ethiopia, and later the Middle East- hence Arabica, around the 10th century. It wasn’t until the 18th century that it was cultivated in Latin America which is now the world s major producer.

The seeds are dried aged and roasted  then ground into coffee. The Coffea  Arabica plant makes a beautiful house plant that is easy to grow, they prefer a bright situation, but out of direct sunlight, so away from the window. Keep away from drafts and  above 18 degrees Celsius as possible. It needs a moist but well drained soil. Keep it on a pebble tray to keep humidity up, water less in the winter when light is reduced. Feed with liquid fertilizer every 2-3 months. It can grow up to 6 feet and so prune in spring. Flowers around 4 years and needs hand pollination with a small brush to set fruit.

Benefits of drinking coffee are, improvements in concentration, memory, and mood. It increases the metabolic rate so aids in fat burning and weight loss. Physical performance is also enhanced. It reduces the risk of developing type II Diabetis if drunk regularly. But it doesn’t stop there, it reduces the risk of Alzheimer’s and Parkinson’s disease developing. It can protect the liver against Cirrhosis and reduce some cancers like bowel and liver, it is very rich in antioxidants and therefore can reduce heart disease and stroke. Quite a panacea!

is the fermented dried bean of the Cacao Theobromia tree, the ‘Food of the Gods’ according to the Aztecs and Maya

Around 40-50 beans in each large ripe pod that unnaturally grows directly on the trunk of this native Amazonian valley tree. And contain about 50% cocoa butter, the Theobromine and caffeine are rsponsible for it’s stimulant effect although less than coffee.  It’s reputation of aphrodisiac properties, may come from its ability to  replicate the feeling of being in love  due to its Phenlethylamine PEA content.

The beans have been processed by ancient civilisations into cocoa powder and cocoa butter as far back as 1500 BC. The beans are extracted from the opened pod with the pulp and laid out to sweat, ferment and dry. This is a critical process for the final taste of the chocolate. The liquor from the pulp can be fermented into an alcoholic beverage.

After drying in the sun the seeds are roasted and ground and sugar, etc. Added to make the chocolate we know and love, around 400 beans to make 1lb.

The Cacao is tricky to grow outside of its cultivated habitats. The pods need to be freshly picked. The bean will not germinate even if slightly dry, it needs a moist warm shady environment like under the canopy of the rain forest and is even known to germinate in the cracked open pod.

The health benefits are many and it is highly  regarded as the number one superfood, due to its very high content of antioxidants, polyphenols-Catechins- flavanoids  well known to reduce Cancer rates and lower LDL Cholesterol with significant effects on the heart and circulation. It reduces BP, Stokes, Heart attacks. Arguably more than any pill. It also significantly increases Dopamine and Serotonin in the brain to improve mood and well being.More info. Here.

Yerba Mate-Ilex Paraguariensis is an evergreen tree, and member of the Ilex holly family that grows widely on the hillsides of Latin America. It grows very rapidly up to 50 feet or 16m 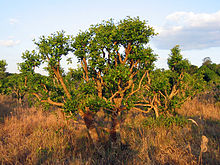 from which the tea beverage Mate is derived. The branches are cut up and dried over an open fire, imparting a smoky flavour, it is threshed to remove twigs then aged which improves the flavour.

It contains about 1% caffeine by wt. And is socially drunk from a gourd through a metal straw passed around a group. Nowadays the vessel maybe made of ceramic, plastic or silicon even.

Apart from the caffeine and some theobromine, it contains the polyphenols flavanoids , quercetin and rutin. It has stimulating and fat burning effects and may help in lowering blood sugar. It also reduces the sense of hunger. 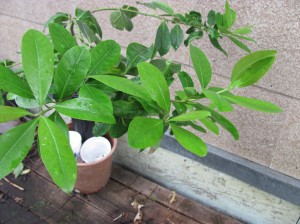 You can grow  Yerba Mate from seed and make your own tea, the seeds need a few weeks stratification period ie regular dips in temperature for proper germination.  Scratching some of the hard seed coat is recommended, soak in water overnight then into a 50/50 perlite/loam mix. Germination is slow keep out of direct sunlight and frost until well established 2-3 foot. A bit like Camellia sinensis (regular tea).

🐛 For Caterpillars Seeking The Butterfly Within 🦋